The last time I posted anything here, it was December 5th. Today is December 20th. Needless to say, the last fifteen days have been a bit … let’s just say “full.” But it was a good “full” – a “fulfilling” kind of “fullness” that seems to happen every year at just about this time.

I confess a misty sentimentality in the weeks, then the days just before Christmas. I am prone to sit in a living room lit only by the lights on the tree, looking on the ornaments hanging there, the kids’ preschool craft projects like “Scared Angel” and “Christmas Cutie,” the shell from Catalina Island that Erin and I got fourteen years ago on our honeymoon, the ballerina that once hung from the mobile above my crib, the souvenir ornaments from just about every family vacation we’ve taken together, the gifts Erin has received from students over her years of teaching.

Everything else goes away in those moments. Sermon writing, lesson planning, Ministers’ School preparations, worship planning, budgeting for 2008, the everyday stresses of doing ministry – it all just kind of fades out. I am aware of a warmth, or maybe a connectedness, or sometimes it feels like a sigh too deep for words. If I ever meditated I bet it would be a lot like this. Borrowing a page from Buddhism, I am practicing awareness.

The space and time that I spend in my Christmas Tree-induced trancelike state (which might be meditation) in no way diminishes all of the other activity that takes place the rest of the time. I mean, our family did four programs this week, three on the same day for goodness sake! There are extra worship services for which to prepare, readers and musicians to coordinate, and special sermons to write. Parties, lunches, open houses, decorations, gift giving, writing “The Christmas Letter” – it’s all there. But if I have my Christmas Tree Moments, I find I can handle the other stuff without freaking out. Or again as my Buddhist friends might say, I find that I am more fully present in those experiences because of the depth of my awareness.

Yes, the season is full. (So full that it crowded out my blogging time.) But it is a good full, not a frantic, barely able to hold it together, grind your teeth until your jaw pops kind of full. The fullness I sense in the season of Advent is a fullness of presence, an awareness of what is good, a sense that there really is something wonderful that is beyond us, around us, within us.

Isaiah wrote about it first and Matthew jumped all over it later on – Emmanuel means “God is with us.” If ever I lose track of that, you know where I’ll be headed. I’ll be sitting in the living room, in the dark, gazing at the Christmas Tree.

The Missouri Annual Conference posted a podcast I did with this whole "Advent Light" thing.
Click here to listen.
Posted by Andy B. at 10:40 AM 1 comment:

Advent Light: It's All the Rage 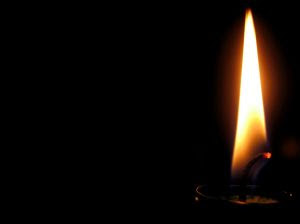 How does this work for Advent?

"Do not go gentle into that good night,
Old age should burn and rave at close of day;
Rage, rage against the dying of the light."

Did you know that darkness cannot be measured, only light? So it is technically correct to say that there is no such thing as darkness, only the absence of light. If the world suffers, if there is pain, if there is hardship, it is not due to the presence of darkness – it is simply because there is not enough light.

It’s not that it’s dark, it’s just that there’s not enough light.

Rage is a great word. Though there is an element of violence associated with it, there need not be. Two of my favorite definitions are "furious intensity" and "burning desire." I also like it because it can be a verb or a noun - you can feel a "sense of rage," you can be "in a rage," and you can just plain "rage." Dylan Thomas's text exhorts us to a furious intensity to prevent the light from dying. It's about death, but it might very well work for Advent, too.

Think about how Advent, this season of light, comes as the hours of sunshine per day grow fewer and fewer for us in the Northern Hemisphere. Darkness arrives as we are sitting down to dinner these days. And it is almost as if we try to ward off this impending darkness by draping a few more strands of little bright sparks of color over the bushes outside, put some extra candles on the altar, twist a few cords around the trees. “You can try, darkness, but you’ll not have your say here!” we shout in defiance.

(Or as they might say in the land of Terabithia, “Nothing will crush us!”)

And as the season goes along, as the days get so short it seems like they are just getting started when all of a sudden they’re gone, as we get closer and closer to that solstice moment, more darkness than any other day of the year, just when we feel like we’re never going to see the sun again – the light of the world appears.

Announced with a shining star, Christ Jesus is born again to bring light into the world, to push back against the darkness and illuminate God’s joy, love, and peace where it flickers amidst a dark world of bitterness, hatred, and injustice.

One more strand on the bushes. Nothing will crush us. "Rage against the dying of the light."

Bring the light this season. Let your words, thoughts, and actions be another strand looped onto the branches of the bushes outside. Come, let us walk in the light of the Lord.