In the United Methodist Church, we are going to be trying a new thing at General Conference in May. It’s called “Rule 44.”

Rule 44 is an attempt to define a way for the General Conference to dialogue about particular questions. It is a group discernment process intended to be used when the questions on the table are particularly emotional or sensitive. The hope is to infuse the General Conference with the spirit of “Christian Conferencing,” gracious and respectful conversations in which we might manage to “be of one heart, though we are not of one opinion.”

I for one love the idea! I'm all for that "grace-filled, respectful dialogue!" It’s a good idea to try something different than what we are doing now, which is essentially following a modified version of “Robert’s Rules of Order” to discuss, amend, and vote on bunches of wordy resolutions. I am so grateful for people who are 1) astute enough to name the need to change, and 2) bold enough to actually propose a way to change.

This year, if we pass “Rule 44,” the idea is to apply it to all of the resolutions about human sexuality. In the future “Rule 44” could be applied to any set of issues. All of the proposals would be taken out of legislative committee deliberation and instead the issue will be discussed in small groups. Each small group would have a trained facilitator, and would create a report of recommendations on how best to proceed with the proposals around the given issue.

It’s pretty bold, isn’t it? It’s very different, and apparently a lot of people are scared of it. Our Missouri delegation had a chance to speak with Judi Kenaston, the Chair of the General Commission on General Conference, and she told us that there have been some pretty negative online responses. (But you know how “bloggers” are, right? A bunch of opinionated blowhards, thinking everybody wants to read their words and stuff. Sheesh!)

One of the reasons for the idea is a request from the 2012 General Conference for a proposal that would shift the tone of General Conference “from issues of governance and towards building consensus on ministry,” an admirable goal and worth pursuing, to be sure. More voices can join the conversation under Rule 44, rather than a few louder ones dominating the discussion. Rule 44 goes a long way toward easing the artificial US v. THEM divide that seems to permeate everything these days. And the final decision(s) that will be made will have a deeper sense of ownership, as each delegate is given an opportunity to express her- or himself in the process.

As a first alternate delegate, I don’t know if I’ll have the chance to vote on Rule 44 or not. If I did, I’d definitely be voting in favor.
Posted by Andy B. at 2:57 PM 3 comments: 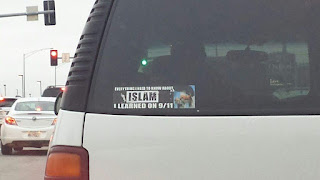 The bumper sticker says, “Everything I need to know about Islam I learned on 9/11.”

There is a picture of the enflamed World Trade Center towers to the right of the text.

Think of the layers of horrible decision-making that bumper sticker had to go through to appear on the back of that white SUV in Springfield, Missouri.

Someone had to think of the idea. A graphic designer had to put it together. A printer had to produce it. A marketer had to stock it in a store or on a website. A citizen had to see it, like it, purchase it, stick it to his or her car, and drive around town with it in full view of anyone who happens to look.

Ignorant – adjective
1. lacking in knowledge or training; unlearned.
2. lacking knowledge or information as to a particular subject or fact.
3. uninformed; unaware.

I really cannot process how I am reacting emotionally to seeing this bumper sticker this morning. I am angry. I am stunned. I am terrified. I am hoping it’s a joke. I am afraid it isn’t.

I am praying to God that this attitude represents a tiny, tiny minority opinion. Please God tell me that it’s the smallest possible fraction of people who think this way. Maybe even just this one guy. That would make it easier, if it was just this one guy.

I know, each person in this nation is entitled to their own opinion. We are free to think what we want to think about Islam as a religion and about Muslims as individual people practicing that religion. No one should attack another person for an opinion they hold.

Unless … Yes, there is an “unless” here. It may not be a legal “unless,” but it is most definitely a moral one. You can think what you want, unless it does harm to someone. If your attitude toward another person does them harm, or creates the potential to do them harm, then it needs to be challenged. And let’s not even entertain the “how can a thought do someone harm” question; it is naïve, deceptive, and misses the point entirely.

“Everything I need to know about Islam I learned on 9/11.”

My heart breaks, my stomach turns, my jaw clenches. I cannot fathom why anyone ever thought such an idea should see the light of day. I don’t know if I’m more upset about the idea itself or about its public display. I even found myself wondering about this person’s friends and family, and why nobody said anything to the driver, like, "Um, hey man. That bumper sticker is horrible and it makes you look like a moron, so you know, you should probably not put it on your car."

Someone please tell me this kind of thinking does not represent more than a handful of America’s most ignorant citizens. Please tell me that. I can’t imagine living in a community in which this sentiment represents more than .05% of the population. No wait, that’s too high. I’m still holding out hope that it’s just the one guy.

Should Christians "Be Political?"

As a part of my sermon yesterday, I posed the question - Should Christians “be political?”

My response - It depends on how you define “be political.”

If you mean get involved with the endless campaigning, the negativity, the bitterness, the fear and anger, the nonsense of what passes for the political process in our nation today, then my answer is, “That’s up to you.” As for me, I’m not going to. It’s a joke. It’s a farce. It’s a side show.

And it’s not what I mean by “be political.”

What I mean by “political” is more aligned with what the word may have originally meant. Something like “the way people interact in the world,” including organizing power and authority in a community, making community decisions, and deciding what kinds of behavioral boundaries define a community. Now, this may not be what “politics” means these days, but I think still at the heart of it, that’s really what it’s about.

And so it seems to me, if this is how we define “political,” then how in the world can a follower of Jesus NOT “be political?” It seems to me that followers of Jesus ought to be very, very concerned with the way people interact in the world. Of course we should be political.

Of course, it is completely inappropriate (on several levels) for a church to give any kind of official endorsement to any one candidate or any one political party. And I as a pastor would never think of telling anyone how they should vote when it comes time to do so. That’s out of bounds, as far as I’m concerned.

A follower of Jesus has decided to give his or her life to something that transcends the self, seeking first the Kingdom of God, and God’s righteousness. That means re-ordering one’s priorities so that they align with God’s.

God’s priorities are revealed in Scripture, which people are able to access through the interpretive lenses of tradition, reason, and experience. God’s priorities are things like … love. And hope. Peace, justice, salvation, grace. All of which Jesus himself embodied in his life, teaching, death, and resurrection.

Why should we “be political?” Because if we truly have adopted God’s priorities as our own, we cannot help but notice that much in this world, including much in our own lives, is not aligned with God’s priorities. There is a great deal that is not as God intends it to be. For the follower of Jesus, the gap between “things as they are” and “things as God wants them to be” demands to be closed.

Why should Christians care about violence in the world? Because one of God’s priorities is peace.

Why should we care about prejudice, discrimination, and oppression? Because one of God’s priorities is justice.

Why should we care about racism, homophobia, sexism, classism, hatred, fear of the “other?” Because one of God’s priorities is love.

Some will say, “Well, all I can do is take care of myself, make sure my own decisions are right, be as good a person as I can. All I am in control of is myself, and there’s just too much in this world that is out of my control to worry about.” That’s fine. All well and good. Nothing wrong with that. It just isn’t Christian discipleship. To borrow a phrase from Jesus, “Even the Gentiles” think this way.

When you decide to follow Jesus, you are deciding to give your life away to a cause bigger than yourself, the cause of Christ. The Kingdom of God is the goal; Christ is the cause; and the Holy Spirit empowers every step of the journey from here to there.

Take for example, a “political” issue like regulation of predatory lenders. Payday loan companies, title loans, and so forth charge unjust interest rates, engage in deceptive and unethical sales practices, and make their profits by deepening the cycle of poverty, often at the expense of people’s health, families, and even lives.

This is one example of one "political" issue I could cite. There are many, many more.

The teachings of Jesus are jarring sometimes. Give to everyone who asks. Turn the other cheek. Love your enemies. Do not judge other people. Each of these ideas of Jesus is very political in that they deal with how people are to interact, and honestly they are very challenging. There’s nothing comfortable about any of them.

It’s one thing to do these things on a personal level. It’s another to work with the systems and processes that make them happen more broadly. One is no better or worse than the other. Both the personal actions and the systemic work can be a part of faithful Christian discipleship. It really isn’t an either-or proposition.

So, should Christians be political? I guess I’m saying, if you're a Christian, you pretty much can’t help it.
Posted by Andy B. at 3:10 PM 1 comment: