The season of Lent begins Wednesday, and can you believe all the hype? Radio stations started playing all the Lent carols weeks ago and I’m so sick of them by now! Entire aisles in the Mega Mart stores have been selling all the Lent decorations at sale prices since the Epiphany! And the kids won’t stop bugging me to go and visit Lenty Claus at the mall, dressed in his purple suit and handing out ash to all the repentant girls and boys.

The commercialization of Lent has got to stop. This is supposed to be a sacred time of preparation and confession, drawing us closer to God as we look forward to Easter and the celebration of resurrection and new birth. And now our schools are cancelling their Lent Breaks, calling them instead some generic term like “Spring Break” or something. I mean, really! We all know that people take that week in order to refocus on the spiritual disciplines, fasting, praying the daily office, and deep study of scripture. Let’s just call it what it is.

It just seems like this time of year is so frantic, all the Lent parties to go to, all the Lent concerts and special events. How are we ever going to get to them all? I’m not even going to have time to go out and buy any new Lent clothes. We also need a new sprig of hyssop to hang in the front hallway. And when are we going to find time to decorate our Lenten Tree? We’re never going to have the house ready for the Holy Week Homes Tour!

Join me in decrying the secularization of Lent! Remember the rationale for the period of time. This year, let’s not give in to the consumeristic pressure we always feel, but rather remember the Lents of days gone by, when times were simpler. Consider home-made Lent cards instead of store-bought gifts. Do you really need to make that fourth dozen of tenebrae cookies, or will three dozen suffice? Remember, Lent isn’t Lent till it happens in your heart.
Posted by Andy B. at 2:13 PM 11 comments:

Somebody stop me. I'm starting to get an optimimstic feeling in my heart about the Kansas City Royals. I'm starting to get that "every year at this time because it's spring training and anything is possible" feeling. Can it be? From whence comes my hope?
Mike Jacobs, Coco Crisp added to the lineup.
A solid rotation of Meche, Greinke, Bannister, Hochevar, and Davies - not spectacular but strong.
Joakim Soria shutting them down from the bullpen.
I can't help but think Alex Gordon and Billy Butler are going to be better this year with a season more experience behind them.
That adds up to this nagging sense of hope that I just can't seem to shake! Am I setting myself up for a fall? Is this bubble going to be burst at some point over the next six months? I've been a fan so long, I've come to expect disappointment, so as not to be disappointed by it when it comes.
But maybe this year ...
I can't even finish that sentence!!!
Go Royals!
Posted by Andy B. at 10:15 AM 8 comments: 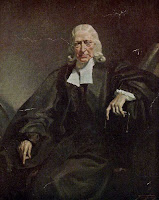 “No, Aleck, no! The danger of ruin to Methodism does not lie here. It springs from quite a different quarter. Our preachers, many of them, are fallen. They are not spiritual. They are not alive to God. They are soft, enervated, fearful of shame, toil, hardship. They have not the spirit which God gave to Thomas Lee at Pateley Bridge or to you at Boston.
Give me one hundred preachers who fear nothing but sin and desire nothing but God, and I care not a straw whether they be clergymen or laymen, such alone will shake the gates of hell and set up the kingdom of heaven upon earth.”

It’s an intriguing thought, isn’t it? One hundred people who aren’t afraid of anything, completely centered on God, connected together in order to bring heaven to earth… wow!

And how often does the phrase “shake the gates of hell” enter our conversations these days? How would that work in a congregational mission statement?

One hundred preachers – clergy, laity, whatever – whose only passion is the Reign of God and whose only mission is making God’s Reign on Earth a reality. How would things be different with a group like that in operation? How many of us would qualify for that kind of a group?

Wesley’s observation that many preachers in his day were not alive to God, fearful, and what he calls “fallen” is convicting. I don’t want to be that kind of preacher. I try not to be. But I have to confess that I have at times been there. We all have, at some point or another. There are times I am motivated by fear of shame. There are times I take an easier path in order to avoid hard work. There are times I feel myself slipping away from the spiritual and toward more worldly expectations.

It’s important to read what Wesley did not write. It’s not, “Give me one hundred preachers, and I’ll …” “…have a neat-o praise band.” “…have the biggest choir in town.” “…write a pithy catch phrase and call it a mission.” “…color-coordinate the church’s logo with the stained glass windows.” “…make sure we don’t have any coffee in the sanctuary so that the carpet stays looking nice for a long, long time.” And so forth. No, it is much, much more than that. It is harder, it is messier, and it is profoundly more dangerous.

But with that said, I’d like to think that my ideal, the paradigm preacher to which I aspire, would make Wesley’s list. I would like to be one of the one hundred preachers, fearing only sin, motivated by nothing but God, eager to bring heaven to earth in powerful and transformative ways. A preacher who would bring it strong, week in and week out. A preacher that would allow the living Word of God to shape everything I say and do. A preacher who desires for my own identity the very identity of Christ, laying myself aside so that only Christ would live.

And it’s not just about Sunday morning sermons, is it? A preacher is anyone who speaks the Gospel, whether in a formal setting like a worship service or just in day to day ordinary life, using words if necessary. A preacher understands the difference between forming a relationship with a brother or sister in Christ and beating someone up with the Bible. A preacher is someone who will take the time to truly connect with someone who is hurting, sharing their time and God’s love with them freely and without reserve. A preacher is someone who is comfortable with the unconditional inclusivity and love that Jesus proclaimed in his life, and lives that kind of openness and love in her or his own life.

Would there be one hundred such preachers, given fully to proclamation of the Gospel, placing God’s priority utmost over congregation, conference, or denomination, unafraid of earthly consequence, and grabbing hold of Hell’s gates and rattling them back and forth for God’s sake, bringing God’s justice, God’s peace, God’s grace, and God’s love to the world … imagine what might happen!

Once (Mark 1:40-45) when a leper came to Jesus to ask for healing, Mark tells that Jesus was “moved with pity.” The NIV, btw, says “compassion” instead of “pity.” The Message says simply, “deeply moved.” The TNIV says, “Jesus was indignant.” That’s pretty cool.

Dig this - the Greek word is splangknidzomai.

Don’t you just love that word? Even the sounds of it, if you can force your mouth into shapes conducive to producing them, are fun! You really need to try it a few times to appreciate it.

There is a Greek word from which this verb comes, the noun splangknon. That means “guts.” Bowels or intestines. No, really. That’s what it means. Look it up in your Brown, Driver, Briggs if you don’t believe me!

So if we were going to be literal with this little vignette, Jesus would have been moved to his bowels for the leper. Of course, the key to interpretation is knowing that, at that time, the bowels were considered the location of the deepest emotion. For the Greeks, your guts were where you felt violent passions – anger and love, for example. But for the Hebrews, guts were for more tender and gentle feelings like compassion and mercy.

Nowadays, we might say that such emotion is “from the heart,” thereby ascribing to another internal organ that for which we really have no explanation. Biologically, emotions come from somewhere in the chemical makeup of your brain, I suppose. But semantically, I’m kind of glad that we’ve moved from the guts to the heart as our metaphor for emotional responses.

What motivated Jesus to heal? He was moved. Deeply moved. (Insert potty joke here). But elementary school humor aside, Jesus was emotionally moved by the leper who came to him asking to be healed. Compassion perhaps. Or maybe Jesus was moved by the leper’s faith. Or both.

The leper (let’s call him Bill) said with certainty, “If you choose, you can make me clean.” There’s not any doubt in Bill’s mind that Jesus can heal him. It’s not a question, “Can you make me clean?” – it is a statement of fact. Bill had been shunned by the rest of society by consequence of his illness, and yet spoke with confidence to a man he was certain had the power within to heal him. And after being healed, defying Jesus’ instructions to silence, he goes around telling everyone what has happened.

It is a miraculous story on so many levels, but at the same paradoxical time, a very human story. Bill is sick man and professes an immense faith – Jesus feels it in his guts and responds with compassion – joy spilling over, Bill cannot help but share with everyone what has happened to him.

It’s a beautiful little story, with a hundred lessons to teach us. And I can feel that in my splangknon.
Posted by Andy B. at 5:11 PM 8 comments: 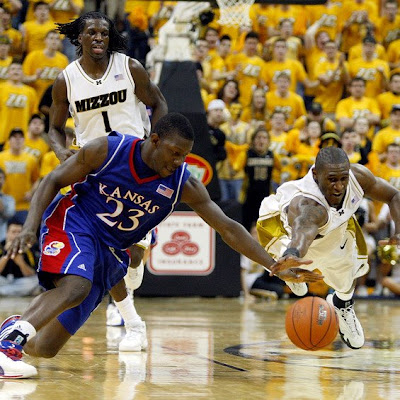 Are you kidding me?

I don't know what to think about: the 14 point comeback? ...16 points in the first half and 46 in the second? ... JT Tiller hurling himself all over the court with reckless abandon? ... Zaire Taylor's cool clutch shot at the last second? ... Kansas's 26 turnovers forced by the insane defensive pressure of the Tigers? ... DeMarre Carroll's 22 points?

Tomorrow I'll be helping with a Cursillo weekend in Kansas City. It's always a wonderful experience, and I love how each weekend I've attended has been a little bit different. I would love to have your prayers for the weekend, especially since we just got two new foster kids this afternoon, and now I'm skipping town for three days leaving Erin to handle it.

So I'm hopeful that I'll be able to be fully present at the Cursillo, but I'm sure I'll be worried about what's going on at home the whole time. One thing that I definitely celebrate is that I do not have to worry about church, because the staff of Campbell is awesome and everything there is going to go perfectly well. And if it doesn't, they can handle it!

Thanks for all your prayers and good vibes sent our way!
Posted by Andy B. at 9:23 PM 1 comment: 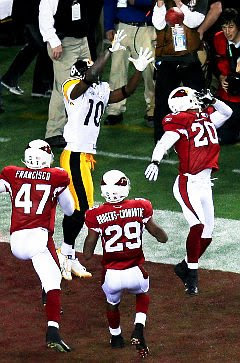 Most amazing catch - ever!

I was rooting for the Cardinals, and they did not disappoint. What a comeback! But what a Steelers drive, and what a catch!

And by the way, the best commercial = the e-trade babies, without a doubt.