I am not very naïve. A little bit, probably, but not too much. I know that big-time politicians are rich people, and most have more than one home. So I’m not naïve; I understand how a person who is smart enough, influential enough, and ambitious enough to become a well known politician – say, a U.S. Senator, for example – would naturally end up being pretty rich.

But I am trying really, really hard to get my mind around being so rich that you lose track of how many homes you own. I mean, really? It seems like it would be an easy question, doesn’t it? “How many homes do you own, Senator McCain?” Even just taking a few moments to think about it and then replying would have been better than, “I’ll have my staff get back to you on that.”

So then that adds a layer. I now have to get my mind around being rich enough to have a staff that you could pay to count your homes for you for the purposes of answering the question of how many homes you have. By the way, do you think he asked one person, or did he appoint a task force? Was it, “Hey Joe, do me a favor and count my homes, would ya?”

Like I said, I’m not naïve, so I know that Senator Obama is rich, too. He probably owns a few homes himself. He’s smart, influential, and ambitious enough to be elected Senator and nominated for president, which means he’s probably loaded up a bit of cash along his way.

How out of touch with median-income-$50,000-citizen are you when you actually lose track of how many homes you own, and have to defer the question until your staff can do some fact-checking? In what world must you live, and how in the heck are you going to make sure the working poor can afford health care by the way, when you have to use more than one hand to count your homes?

I’m not saying that being extremely wealthy automatically disqualifies someone from leading the country, either. But it would be nice if someone would remind me of the distinction between a republic and a plutocracy again. The line seems to have grown a bit fuzzy.
Posted by Andy B. at 11:00 AM 8 comments:

Email ThisBlogThis!Share to TwitterShare to FacebookShare to Pinterest
Labels: politics

Usain Bolt is a fast man. He runs faster than any human being alive and for that matter - any human being who has ever lived. He not only won the Olympic sprints, he made the other runners, who also happen to be very, very fast people, look slow.

And not only is Bolt fast, he runs so easily that it actually looks like he's running slow, kind of jogging along. I know he's not, but it just shouldn't look so easy, you know? If he is going to crush the competition into oblivion, at least he should make it look like he's working at it.

Not only is Bolt fast, and not only does he make it look easy, he has a really good time while he's doing it, and it shows. He's out there posing, mugging the camera, dancing, taking off his shoes, messing around with other runners - he's having fun. He's 22 years old, the fastest human on earth, and he's having fun.

Which, apparently, is not okay with the Olympic people. "That's not the way we perceive being a champion," said Jacques Rogge, the International Olympic Committee president, and confirmed stick in the mud. It seems Bolt's behavior might be perceived as disrespectful to the other runners, and not fitting for an Olympic champion.

or the other runners obvious admiration for his accomplishment, saying things like, "I love watching him when he does his thing" and calling him names like "Superman 2." But the sight of a young man thumping on his chest and throwing out his arms at the end of a race is just too much for the IOC, or at least for its president. He said, "He might have interpreted that in another way, but the way it was perceived was 'catch me if you can.' You don't do that. But he'll learn. He's still a young man."

I think it's that "You don't do that" line that gets under my skin. Because when Rogge says "you don't do that" of course what he means is "I don't do that." Obviously, Usain Bolt does do that, and Rogge just thinks it is somehow not reflective of the Olympic attitude or something.

And because "he's still a young man" that means obviously he just doesn't know what's appropriate. The corollary being, if he were older he would therefore know what was appropriate and then act ... well, ... appropriately. But it doesn't cross Rogge's mind that Bolt might, in fact, know exactly what Rogge thinks would be appropriate and has another idea altogether about what "appropriate" really is.

AS USUAL, I see something here that the church might learn. (You knew I'd get to it eventually, didn't you?)

And further, how much do church people say, "The young people might be a bit ... 'energetic' ... now, but they're young and they'll learn how to act more appropriately when they grow up" or something along those lines? As if being energetic in church is something we should grow out of over time.

MAYBE, JUST MAYBE the people in church who are doing things differently know exactly what all those "church people" think would be more appropriate, and have their own ideas about what makes something appropriate.

And maybe, just maybe, we shouldn't expect the young people in our churches to one day grow up to be just like all us old folks. Maybe we should just let everybody be who we are and figure out how to be okay with that.

Usain Bolt says, "I do not compare myself to other people, I am just trying to be myself." And I for one love watching him be who he is.

Update: Pink hair in Springfield schools: Disruptive? Apparently, "You don't do that" also applies to hair coloring. I hope Springfield School administrators are rooting out all those teachers who are hiding their grey!

Hey - what do you know? My"Distinctly Methodist" post has been picked up and published by the United Methodist Reporter.

Email ThisBlogThis!Share to TwitterShare to FacebookShare to Pinterest
Labels: Shameless Self Promotion

Two week vacations are good things! I highly recommend them. Here was ours:

Chapter two: Osage Beach, Mo.- Swimming in the lake, Swimming in the pool, Hiking at Ha-Ha Tonka State Park, more swimming in both lake and pool, mini-golf at Pirate's Cove, general hanging out and being lazy, watching the opening ceremony of the Olympics, and did I mention there was swimming?

Interlude: Columbia, Mo.
- Getting together with Bryan family, worship together at Missouri United Methodist Church, singing with my wife and kids, baptism of nephew Braeden, hearing my brother Brad preach. 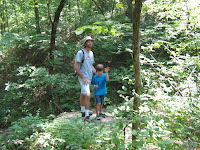 And now we are back in Springfield, ready to get rolling again. The kids have a week until school starts, and so that's on our minds. We're getting our house ready to receive foster kids, maybe in a month or so. We're enjoying the last few days of summer with sunny skies and delightful, air-conditioner-free temperatures. And we're starting a series on the book of Exodus at church, plus getting things set to go for fall programming.

Oh, yeah, one more thing - we are completely addicted to the Olympics, as a lot of people are. Go world!
Posted by Andy B. at 1:46 PM 3 comments:

Tony Jones, who is coming to Missouri Ministers' School in January, is currently doing what he is calling the Church Basement Roadshow.

On the website, the Roadshow is identified as "A Rollin' Gospel Revival is rumbling across the U.S. this summer, bringing good fun and good news to anyone who will listen."

I gotta tell you, watching this video, reading his book, and keeping track of his blog, I am more and more excited about his presence at Ministers' School this year. And I confess that I love seeing "Missouri Ministers' School" listed on his speaking schedule!

It may sound a bit like I have a little bit of a clergy-crush on Tony, a guy I've never met but only communicated with via email. Maybe a little bit, ... yeah, I guess I do. But he writes things like this:

...for this group, the message of the gospel is unchanging - it's been figured out, once and for all, never to be reconsidered.
But to another group, the methods and the message of Christianity are bound to be reconceived over time. Indeed, if one changes the methods, one will inevitably change the message.
Another way of saying this is that the Christian gospel is always enculturated, always articulated by a certain people in a certain time and place. To try to freeze one particular articulation of the gospel, to make it timeless and universally applicable, actually does an injustice to the gospel. (New Christians, p. 96)

We could spend all three days of Ministers' School talking about this one idea (and I am hopeful that we will!). What's the difference between saying "the Christian gospel is always enculturated" and "the Christian gospel has been co-opted by culture"? And whose culture are we talking about, by the way? Suburban middle class? Rural poor? Urban inner city? And so forth ... ?

Anyway, I'm really excited about meeting and working with Tony, and I'm hoping the 2009 Ministers' School turns out to be a pretty cool event.