"Look Down" - Our Fundamental Connectedness

One of the themes of the musical Les Miserables is this refrain – “Look down.” These are in fact the first words sung, by the prisoners on the chain gang. They are words of caution spoken among them, since to make eye contact with the guards would invite a harsh response. And metaphorically, to “look up” and express any hope for the future was dangerous. Hence:

“I know she’ll wait; I know that she’ll be true.
Look down, look down, they’ve all forgotten you.”

Later, the refrain is sung by the people of Paris.

This time around, the words “look down” are spoken by the poorest in the streets as a plea to the people of the upper class, asking them to “look down” with mercy and pity. To “look down” on another person metaphorically is to think they are “less than,” to consider oneself superior to them. And if superior, then disconnected.

Herein lies the ethical problem of arrogance. When one person or group of people think they are inherently superior to another, they are assuming a disconnect that does not in fact exist. The person or group that has self-identified as superior will likely not see it as such, but in fact the separation they assume is mythical.

Because of course, we are not in the slightest bit disconnected from one another. In fact, we are more intimately woven together than we realize. The Bible expresses this truth in many ways, including in the creation story itself. Human beings are connected to one another and to the rest of creation from the very beginning, even receiving divine instruction to watch over the other living creatures in the same manner and with the same care as the Creator would.

In the Christian Scriptures this profoundly interconnected unity is one of the most significant themes. The people are described as individual parts of one body. When one suffers, all suffer. When one rejoices, all rejoice. “You are one in Christ” is not a word of instruction; it is a description of reality. Over and over again, the Christian religion affirms our fundamental connectedness to one another, and to the world around us.

In stark contrast, so much of what we experience in the world encourages us to separate from one another. Backyard decks with six-foot privacy fences have replaced front porches. Fear and suspicion are our initial reactions to strangers, rather than friendly hospitality. Public interactions are defined by video screens and earbuds rather than eye contact, handshakes, and real-time conversations. “Look down” takes on a whole new meaning for people messing around on their phones instead of interacting with the world around them.

Beyond that, the ones we do connect with tend to be very, very similar to our selves, and thus very, very familiar. We live inside of bubbles we have created for ourselves. We only watch news channels we “agree” with. We know which people we can talk with and which we can’t, and know which topics to avoid altogether. We rarely read anything that is dramatically different from our own perspective on life.

We even tend to drive by the same routes to the same places over and over again! 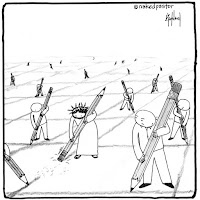 To live isolated lives is incompatible with Christian teaching. Jesus is the ultimate barrier buster (as I've mentioned before) and those of us who follow him are supposed to be the same. Rather than exist in our familiar bubbles, fearful of and reticent to encounter anything outside of our own comfortable echo chambers, Jesus asks his followers to lovingly eliminate the barriers we so expertly place among ourselves.

Simply put, one cannot follow Jesus by “looking down.” We need to look up, look out, make eye contact, be aware of one another, truly see each other. And who knows, maybe we’ll see something new, maybe we’ll learn something, and maybe we’ll make a new friend or two in the process!